In this short, atmospheric interactive fiction set in your childhood bedroom, you take on the role of the storytelling elder sibling, telling stories to your little sister until she falls asleep. But what will the story be?

Created for the Global Game Jam 2022, the game deals with the jam's theme Duality in subtle ways. The main duality is one between sleep and awake; on the one hand, the player wants the sister to fall asleep, but on the other, if she falls asleep, the game ends. During the game, the player balances asking the sister questions with telling the fairy tale, resulting in a truly interactive story. The theme is also visible in that the player is given mostly binary choices.

The idea of the game was inspired by an improvisation technique Chride, the writer of the game, has used a lot with children, to tell stories together.  In this storytelling method, the person being told the story gets asked questions by the storyteller, such as:

... and based on the answer, the storyteller adjusts the story. Now, most fairy tales begin the same: Once upon a time ; but they also follow similar structures. Whether your preference is  Joseph Campbell's Hero's Journey,  Bruno Bettelheim's The Uses of Enchantment or why not, Blake Snyder's Save the Cat or John McKee's Story, structure can be a handy tool. Early on, the fairy tale introduces its protagonist. We see what the protagonist usually does; and then a problem, or, inciting incident, occurs. The protagonist sets to solving the problem, but a complication occurs. However, using something they found along the way, or something they already had all along, the protagonist is able to overcome the problem, and return home.

This setting also felt like an interesting challenge for writing an interactive fiction; how does the player feel agency, even though it's the non-player character that makes all the decisions?

The game was created in under 48 hours at the FGJ Helsinki Skunkworks site of the Global Game Jam 2022. The art of the game was inspired by children's books, and drawn by Chride Lassheikki using an iPad, while the atmospheric music was composed by Leo Krechmer.

Sleepy Tales is available to play for free on itch.io. The game was made in Unity, using Ink and Inkle Studios' demo / tutorial project The Intercept as the base on which it was built.

Sleepy was made by:

Lassheikki and Krechmer have collaborated previously on the Pocket Jam #4 winning game Mochabot Organic, as well as on the infinite runner Codename Darling.

The Ink demo the project was built on, The Intercept, can be found on GitHub. 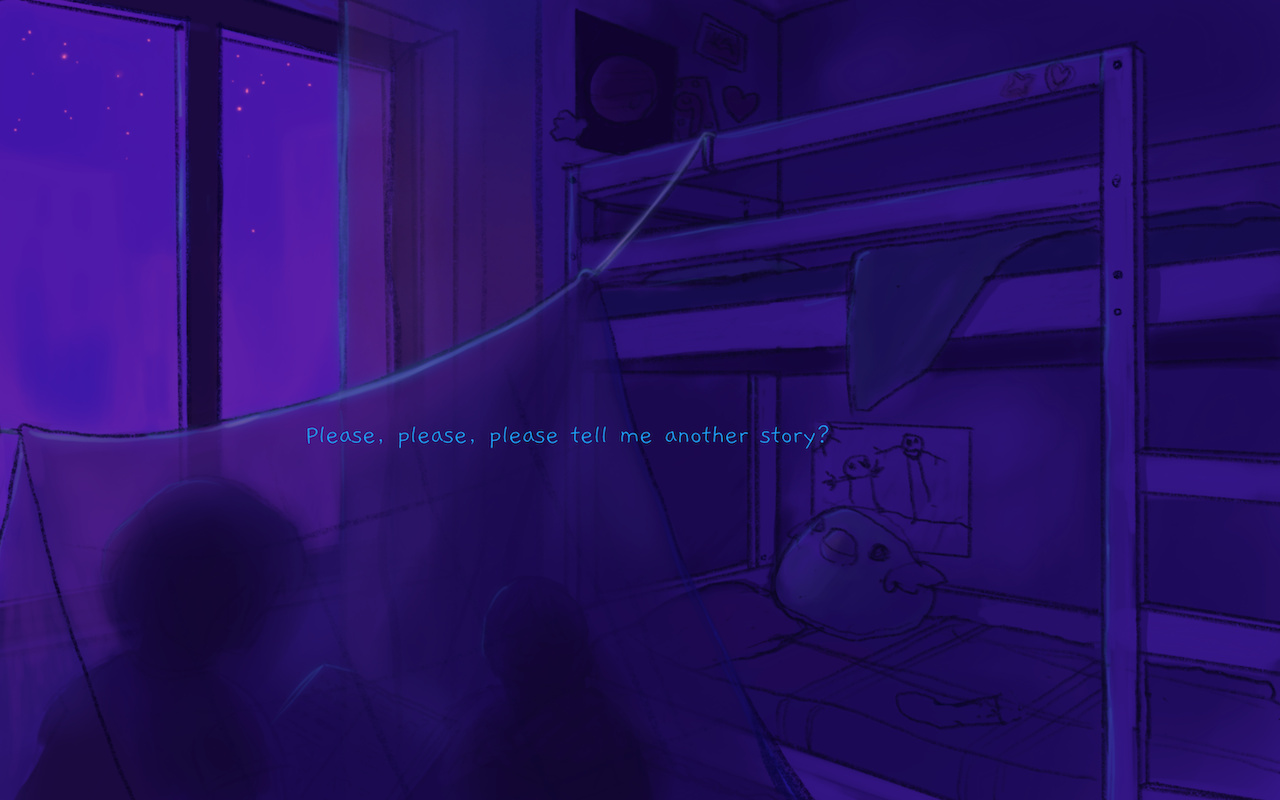 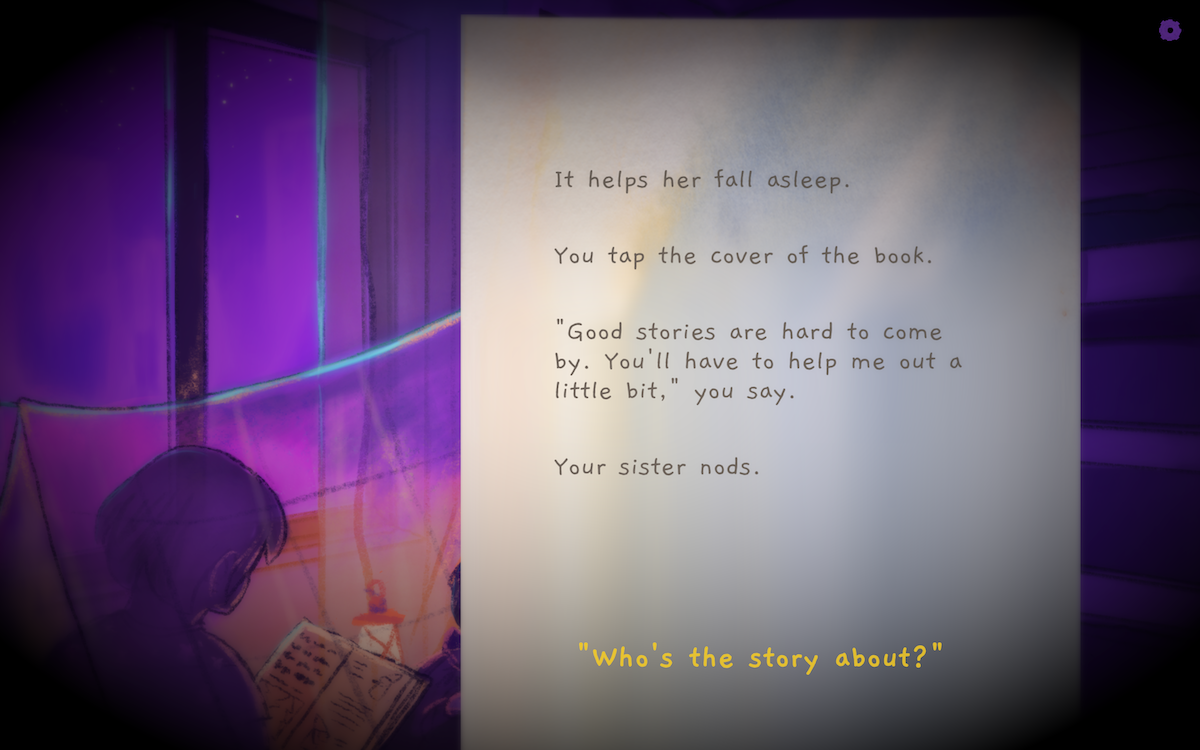 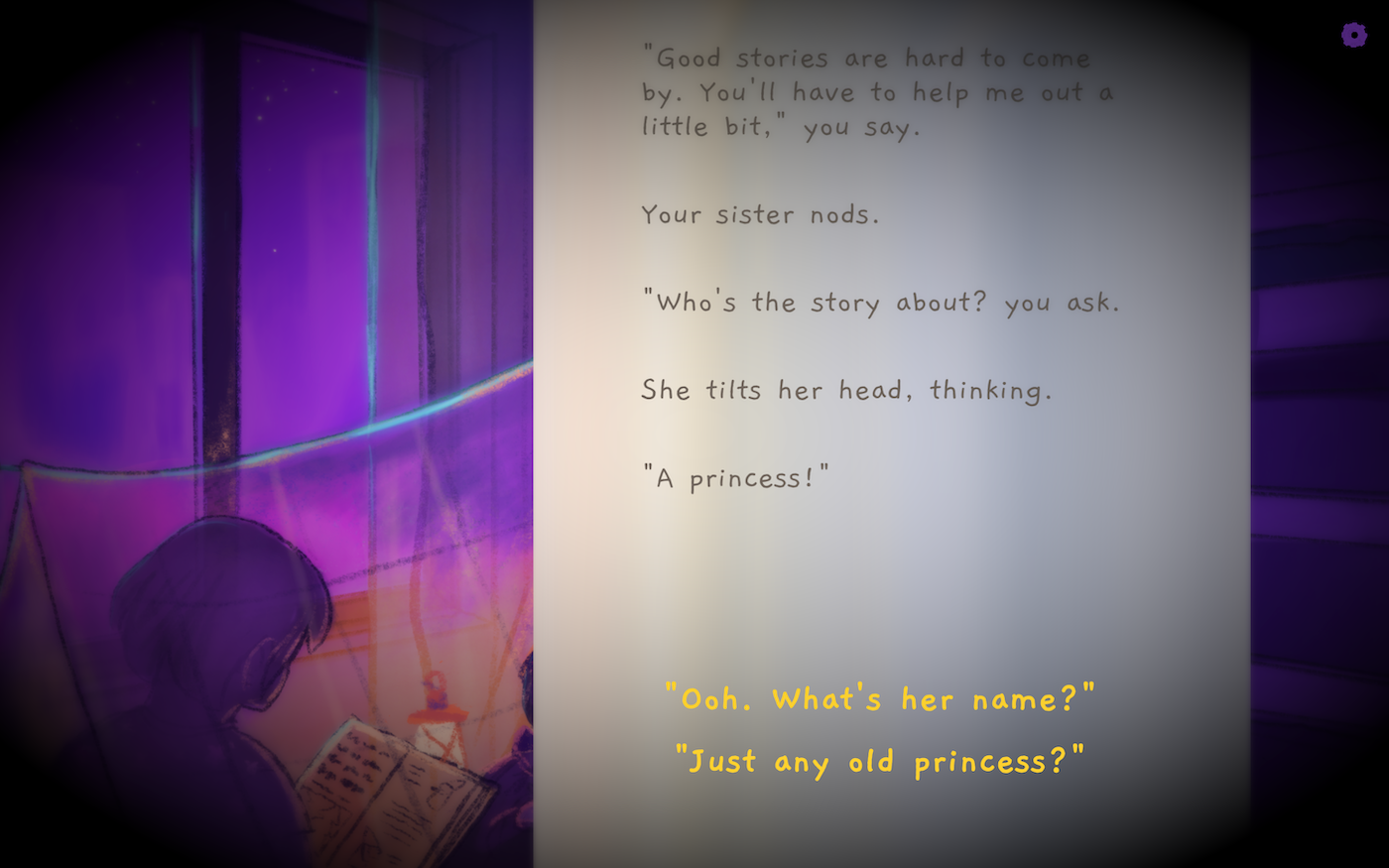 Tell your sister stories until she falls asleep